The OCC is not throwing away its shot! What the crypto guidance actually means 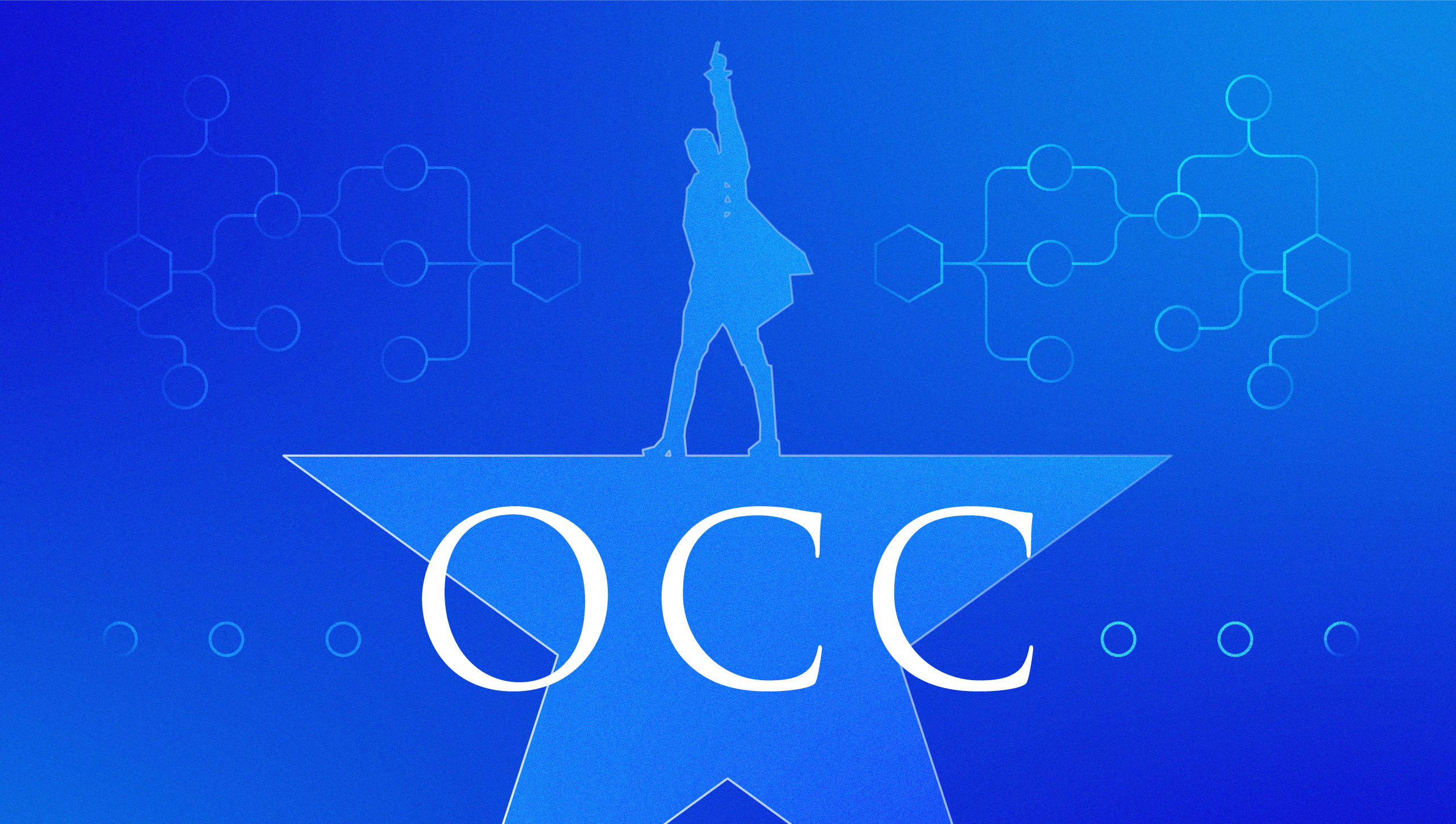 Brian Brooks Is Not Throwing Away His Shot!

Over the last few months, Brian Brooks, the Acting Comptroller of the Currency (OCC) has been, like Lin Manuel Miranda's Hamilton, "writing like he's running out of time," laser focused on fintech, and cryptocurrency, providing interpretive letters and guidance clarifying that banks can custody cryptocurrency and stablecoins, as well as engage in stablecoin activity.

The latest love letter to crypto came on January 4, 2021.  OCC Interpretive Letter 1174 explains that banks may use new technologies, including independent node verification networks (INVNs) and stablecoins, to perform bank-permissible functions, such as payment activities. Simply stated, a bank may use stablecoins (cryptocurrencies tied to one or multiple fiat currencies in order to minimize volatility) to facilitate payment transactions for customers.  In doing so, a bank may issue stablecoins, exchange stablecoins for fiat currency, as well as validate, store, and record payments transactions by serving as a node on a blockchain (INVN).

"The OCC has emerged as one of the cryptocurrency industry’s most supportive champions over the past few years. Their latest interpretive letter builds on that legacy, opening up basic financial services to crypto and blockchain networks and providing the same, fundamental access that other industries have long enjoyed." —  Kristin Smith, Blockchain Association Executive Director

The news from the OCC is indeed groundbreaking and incredibly exciting to the cryptocurrency industry.  Blockchain Association Executive Director Kristin Smith told TRM, "The OCC has emerged as one of the cryptocurrency industry’s most supportive champions over the past few years. Their latest interpretive letter builds on that legacy, opening up basic financial services to crypto and blockchain networks and providing the same, fundamental access that other industries have long enjoyed."

While the Treasury Department is being criticized for potentially stifling innovation by issuing FinCEN's notice of proposed rulemaking (NPRM) on unhosted wallets, the OCC is leading the charge in support of innovative yet responsible technology.

What Does the Guidance Mean for Banks and Cryptocurrency?

As the OCC letter states, “over time, banks’ financial intermediation activities have evolved and adapted in response to changing economic conditions and customer needs. Banks have adopted new technologies to carry out bank-permissible activities, including payment activities. . .The changing financial needs of the economy are well-illustrated by the increasing demand in the market for faster and more efficient payments through the use of decentralized technologies, such as INVNs, which validate and record financial transactions, including stablecoin transactions.”

The key words in that quote are likely "over time."  Banking is indeed the story of regulation eventually adapting to changing technology.  From Hamilton’s First Bank of the United States in 1791 (rap battled*,* "If we assume the debts, the union gets new line of credit, a financial diuretict,") to the creation of the FDIC, to the embrace of online banking, the story of the U.S. financial system has been about adaptation and evolution.  But that is evolution not revolution and evolution can be very slow.

First, banks would need sufficient demand from customers to justify the time, resources and technology needed to safely hold or engage in transactions involving cryptocurrencies.

Second, banks would have to be willing to take the risks, real or perceived, of holding or transacting in cryptocurrencies, even stablecoins. This is why anti-money laundering and blockchain intelligence like TRM are foundational infrastructure for continued mainstream adoption of cryptocurrency especially for financial institutions.  As the OCC makes clear, "Banks must also be aware of potential risks . . . Among the compliance risks, banks should guard against potential money laundering activities and terrorist financing by adapting and expanding their compliance programs to ensure compliance with the reporting and recordkeeping requirements of the Bank Secrecy Act and to address the particular risks of cryptocurrency transactions."

A September 2020 survey from the Association of Certified Anti-Money Laundering Specialists and the Royal United Services Institute found that 35% of respondents from financial institutions felt that the primary use of cryptocurrency was for illicit transactions, and 70% worry that holding cryptocurrency could expose their institution to criminal activity such as money laundering. The recent DOJ Cryptocurrency Enforcement Framework, which focused almost entirely on concerns regarding the use of crypto for illicit activity only adds to these perceptions.

Finally, banks should embrace the promise of cryptocurrency and prioritize the resources (or partnerships) to build products and services around this evolving asset class. The good news is, we've already seen banks embrace this technology to-date via permissioned networks. In 2019, J.P. Morgan became the first U.S. bank to create and successfully test a digital coin representing a fiat currency. The JPM Coin is based on blockchain technology enabling the instantaneous transfer of payments between institutional clients. Signature Bank offers a blockchain-based digital payments platform, Signet™ , which is designed to enable real-time payments for its commercial clients (24/7/365). From here, per the OCC's guidance around INVNs, we'll likely see banks begin interacting with public blockchain networks. Given these regulatory tailwinds and meaningful evolutions in the cryptocurrency market structure, we will eventually see a concerted move by banks into cryptocurrencies which are, in most respects, far safer and more transparent than fiat.

So are banks really ready for cryptcurrency, the "young, scrappy and hungry" alternative to fiat?  The OCC letter indeed opens the door to the faster, more efficient, and democratic promise of cryptocurrency.  But that promise requires conservative financial institutions to embrace a new technology and be "satisfied" that the perceived risks can be mitigated.  Anti-money laundering and blockchain intelligence like TRM will be foundational infrastructure and key to bank adoption.

The OCC letter opens the door to the faster, more efficient, and democratic promise of cryptocurrency.  But that promise requires conservative financial institutions to embrace a new technology and be "satisfied" that the perceived risks can be mitigated.

The OCC’s guidance opens up the possibility that banks will eventually "be in the room where it happens," by using INVNs and stablecoins to dramatically increase the efficiency of payment activity.  But in order to do so, banks will have to implement and embrace technology.  Brian Brooks and the OCC are clearly "not throwing away their shot," but we are likely still going to have to "wait for it."

How Can TRM Labs Help?

Cryptocurrency businesses are constantly adjusting to an ever changing regulatory landscape.  The recent OCC letter and the FinCEN NPRM on unhosted wallets are just the latest examples. TRM Labs (TRM) provides the next generation blockchain analytics software for cryptocurrency transactions to help your business stay safe from malicious actors and meet regulatory obligations. Our mission is to prevent cryptocurrency fraud and build a safer financial system for billions of people.

We help government agencies, cryptocurrency businesses, and financial institutions trace the source and destination of funds in any digital asset, monitor transactions, and create cross-chain profiles for crypto-related entities like exchanges. Our team of world class data scientists, investigators and anti money-laundering experts have created the next generation tool for monitoring the blockchain to prevent malicious activity and keep the cryptocurrency ecosystem safe.

TRM Labs, the leading provider of crypto fraud detection and anti-money laundering (AML) software, is pleased to announce the appointment of Ari Redbord as its Head of Legal & Government Affairs.

What Does the 2021 NDAA Mean for Cryptocurrency?